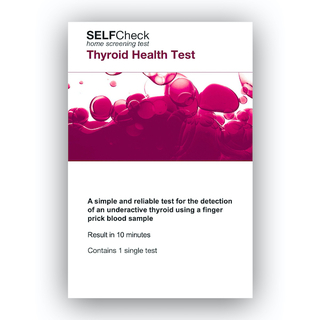 Symptoms of an under active thyroid gland are quite general and can easily be dismissed. According to the NHS, symptoms of an underactive thyroid are often similar to those of other conditions, and they usually develop slowly, that they may not be noticed for years. The only accurate way of finding out whether you have a thyroid problem is to have a thyroid function test, where a sample of blood is tested to measure your hormone levels.

Thyroid disorders are one of the most common disorders in the world, and are more common in women. The patient support group Thyroid UK, state that hypothyroidism is mostly seen in women between the ages of 40 - 50 and is ten times more common in women than men. It often occurs during the menopausal years and symptoms are often ignored during the early stages by both patients and doctors if the patient is at this age.

Doctors have a range of thyroid function blood tests available through hospital laboratories at their disposal which can pin-point the reason for an under active thyroid. One of the most common tests used for diagnosis is a blood test that measures thyroid stimulating hormone (TSH) which is secreted by the pituitary gland. TSH regulates the activity of the thyroid and elevated levels of TSH are associated with an under active thyroid.

The SELFCheck Thyroid Test contains one disposable test that shows whether the level of TSH in a finger prick blood sample is high or normal, with a result in minutes. A high level indicates that hypothyroidism is likely.

Users of SELFCheck branded health tests can be confident that the tests meet all UK and EU regulations for medical tests used at home as well as for professional use. It is recommend that any self test result is followed up by speaking to a GP.