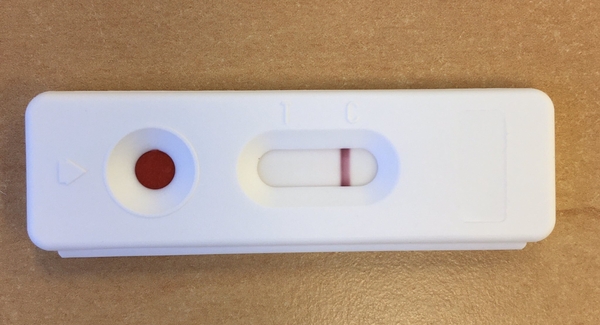 Can self test kits be easily used by laypersons?

Out of 5,313 SELFCheck blood test users, 99.4% did not report any issues using their self test kit. A minority of users (0.58%) reported issues mostly concerning the use of an automatic lancet or collecting the blood drop. Some users were unaware that the reason for test failure was inadequate technique or unknowingly misinterpreting the instructions for use. The high level of usability was attributed to the clinical grade quality of components, clear instructions, and access to professional customer support.

Self test kits such as SELFCheck, which require a finger prick blood sample, have become increasingly available to help diagnose a range of medical conditions. In the UK, self test kits are strictly regulated in the same way as hospital laboratory tests, where manufacturers have to demonstrate that the tests give reliable results and additionally, are easy to use by the majority of laypersons (IVDD98/79EC). The actual test devices used in self test kits are usually the same as those used in hospital laboratories, with equivalent clinical sensitivity and specificity and, when used correctly, will give equally reliable results.

Doctors are aware that all medical tests, whether used in a hospital laboratory or at home with a self test kit, may give a small number of false positive or false negative results and this is explained fully in the information provided with the SELFCheck test kit. Self test kits are not meant to replace established pathways for diagnosis by doctors but are based on the same technology used in hospitals and can help prompt users to speak with their doctor or pharmacist sooner than they might have.

The aim of this study was to collate and categorise issues experienced by SELFCheck blood test users and the reason for test failure as part of the company's quality assurance program.

Data from 5,313 SELFCheck blood test kit users was reviewed during March, 2021 to determine the rate and type of user issues. All tests were purchased directly from the company's own website www.healthcheckshop.co.uk and the number of complaints was recorded and categorised. All users received the instruction leaflet (IFU) and were encouraged to watch the video on the SELFCheck Tests YouTube Channel by means of the pack insert and on the order confirmation email, before starting their test. No data on the proportion of users that watched the video is available. Each IFU contained information on how to contact SELFCheck if they had a problem using their test kit.

SELFCheck users who reported a problem were asked to send a photo of their test result by email which was checked to identify whether the cause was a user issue or defect with the device.

During the evaluation, out of 5,313 SELFCheck users, 17 users (0.32%) reported difficulties using a SELFCheck test. One in a thousand users (0.09%) had a problem using the lancet, two in a thousand (0.19%) had difficulty collecting enough blood and one in 2,500 (0.04%) added too much blood or diluent. Although only one lancet should be required to obtain the blood sample, most users are unfamiliar with these devices so each SELFCheck test kit contains an additional lancet in case the first lancet is not pressed firmly against the finger tip or is prematurely activated.

In addition, 15 other complaints (0.28%) were received attributed to a test malfunction although it is likely that these may have also been caused by user issues that could not be attributed to any particular category and such device failures have not been reproduced under laboratory conditions. The overall number of users reporting that they were unable to get a result was 31 (0.58%).

From the information available, most laypersons did not report any problems using their SELFCheck self test kit (>99.4%). A small number of people (0.28%) had obvious issues using a lancet or collecting the correct amount of blood. A replacement test kit was sent to each user reporting a failure on the first attempt. None of the users of the SELFCheck replacement test reported any issues to SELFCheck. For some users, unfamiliarity or apprehension of using lancets to collect a blood sample may have contributed to the failure to complete the test on the first attempt.

Some of the users who were unable to complete the test due to adding insufficient blood or diluent were unaware that they did not follow the instructions and incorrectly attributed their invalid result to device failure despite the photographs submitted of their test clearly showing lack of blood, a blood clot or insufficient diluent being added.

Outside of this study, in a few isolated occurrences, we have also seen blood or diluent being added to the results window instead of the sample application well and reports that there was no needle in both finger prickers when in fact the needle retracts following activation into the plastic casing of the automatic lancet for safety and cannot be seen, despite this information being clear in the IFU.

Overall, most laypersons (99.4%) did not report any problems from using their SELFCheck self test kits. The high level of usability was attributed to the clinical grade quality of components, clear instructions, and access to professional customer support.

Users of self test kits should be aware of the limitations of both laboratory and self test diagnostics and the need to carefully read and understand the instructions for use before starting the test. This is particularly important if the user has previous experience of using similar devices, such as blood glucose meters, in a professional healthcare setting, as procedures or components, such as automatic lancets, can vary in how they are to be used from one manufacturer to another. For example, the amount of blood required for most self test devices, although only a few drops (50µL), can be a hundred times more than is required for a blood glucose meter test strip (0.5µL).

Manufacturers can help reduce user issues by designing self test diagnostics to require the minimum amount of blood possible (<100µL) and provide high quality lancing devices such as the Owen Mumford Unistik 3 Extra, which are designed to produces on average 75µL to 125µL of blood and incorporate technology to reduce discomfort during use.

Although the number of SELFCheck users who failed to get a result was very low (<0.6%), in each instance such an experience could be falsely attributed to a defective device, lose confidence in self tests and/or write a bad review. Self test users should be reassured that such failures are actually quite rare and that the tests have similar performance to those used in clinical settings.